I may have watched the wrong movie this week, but I don’t mind, I loved it.  And I can watch one of the other ones as well, so perhaps I will do 2 posts this week, we’ll see.

In the movie “Wild”, Cheryl Strayed embodies Scroll III of The Greatest Salesman.  Spoiler alert: I will give away a lot of the movie.

Like the bulls which are tested, Cheryl was repeatedly tested to see if she would go on.  Prior to her walk by an abusive, alcoholic father and later (but still before the hike) by the death of her mother.  During the walk, by weather (cold, hot, no water, snow), a huge heavy backpack, the wrong size shoes, the wrong fuel for her stove.  And yet she was willing to charge forward day after day – in spite of the sting of the blade. 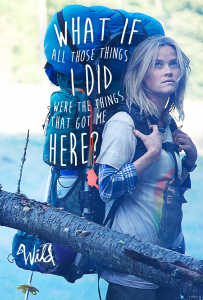 She did not know how far she must go and she continually met with failures.  Always she took another step, then another.  Like the blade against the mighty oak, her journey started with very little progress.  As she became stronger and learned more, her days became longer and she covered more ground.  She built her castle one brick (one step) at a time, and with small actions repeated she completed her journey.  She tried, tried, and tried again.  She had many detours and obstacles, but kept going.  And she did develop her skills and became stronger and more confident.

Cheryl did consider defeat, many times, and she was infected with the disease of despair, but she walked on in despair.  At times I think she only continued on because she had nowhere else to go.  She toiled and endured.  She definitely ignored the obstacles at her feet and kept her eyes on the goals above her head.  When her dry dessert ended, she arrived at the “Bridge of the Gods”, where she finished her walk.  She persisted until she won!

She walked 1000 miles over 94 days. She transformed herself and became the woman she wanted to be, the woman her mother raised her to be (that was her DMP). She learned the power of forgiveness, especially forgiving herself.  Working through her challenges as she walked helped her to develop a positive mental attitude.  Her plan of action was to just keep going.  At first she was very much alone, but as she walked she did make alliances with other hikers, her ex-husband, other people she came across, even a grumpy postal clerk.  And she did persevere and succeed.  It was a great story, and knowing that it is based on a true story makes it even better. 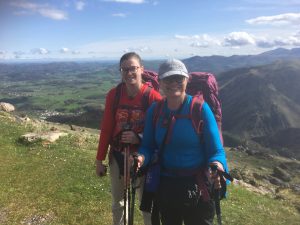 My own walking journey (in Spain) this year was quite a contrast.  I walked about half the distance, which is definitely an accomplishment, but like a walk in the park in comparison. I had a shower every day and slept in a bed every night.  I had plenty to eat and usually others prepared the meals. In fact pilgrim meals were my favourite.  So I only had to carry a fraction of the weight that she did.  With mercados, pharmacias, and bars/cafes every few km, we had it pretty easy.  And there were always people nearby.  So while I had plenty of time for reflection, I wasn’t limited to my own voice, whether in or outside my head.  Like Cheryl, I did get stronger and more confident, and created many alliances as I walked.

But this is not a contest. Everyone carries their own burdens, everyone walks their own Camino.  Cheryl Strayed walked her own Pacific Crest Trail, and she triumphed.