When I heard we were going to be crossing out words in “The Greatest Salesman” I was initially surprised and a bit horrified.  Defacing a book!  But I am being open to the process, so I went along with it, and now I love it!  It really does read much better without the “will” words.  And the passage I identified in my last blog is even better now, without the “will’s”, and since I can now leave out the negative ending about strife and sorrow:

“As the words of these scrolls are consumed by my mysterious mind I begin to awake, each morning, with a vitality I have never known before. My vigor increases, my enthusiasm rises, my desire to meet the world overcomes every fear I once knew, and I am happier than I ever believed it possible to be.”

Much better!  And yes, I am stilling waking with vitality!  My morning sitting exercise has been tremendously uplifting.  It is kind of like a buzz (without drugs or alcohol) – and now I can capture that feeling during the day if I think about it.

While I was sitting yesterday morning, trying to clear my mind, one thought came unbidden that was actually quite enlightening.  I think it was the first book I ever read about the Law of Attraction, several years ago – way before “The Secret”.  I must have borrowed it from a friend because I do not have it any more.  I hadn’t thought of it for a long time, but the author’s name bubbled up to the surface of my consciousness:  Lynn Grabhorn.

After I finished sitting, I looked up  and borrowed the book from the library: “Excuse Me, Your Life is Waiting – the Astonishing Power of Feelings”.  Wow.  I don’t think I appreciated it so much back then, but I know that was the start of my interest in this kind of information.  I haven’t read very far yet this time, but if I  recall correctly, she described this positive feeling as kind of a buzz, just like I felt during my sitting.  And she talks about using our feelings to  raise the frequency of our emotional vibrations to attract what we want, instead of what we don’t want.  Good stuff!  Here are her steps to deliberate creation:

And I am only up to page 36.  It might be a bit of a different angle to the Law of Attraction, but I think it is helping me to “get it.” 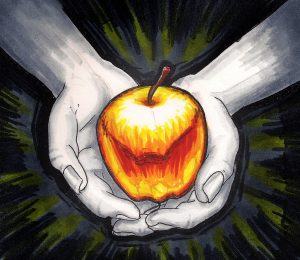 On another note, as I was re-working my DMP this week, I made a change to one of my aspirations.  Initially I had put in that I was achieving the rank of Ambassador in my company.  Well, that would be very nice, and quite comfortable, and definitely a stretch from where I am now.  But then, I thought again of  words of “The Greatest Salesman”:

“I am prepared for wisdom and principles which guide me out of the shadows into the sunlight of wealth, position, and happiness far beyond my most extravagant dreams until even the golden apples in the Garden of Hesperides seem no more than my just reward.”

So I changed my DMP to the rank of President, our highest rank – why limit myself?  If I can edit a book to make it even more powerful, why not edit my life to reach for more?  Especially when, in achieving that goal, I am helping so many more people to reach their goals and aspirations!