Did you know that “Battleshipping” is a verb?  Well, maybe it isn’t in the dictionary, but within the Master Key Experience Community it sure is!

At the end of each lesson in The Master Key System, the reader is given an task to help to exercise one’s thinking muscle.  As we are learning in the Master Key Experience, everything starts with thought.

Thought is the cause, and the experiences with which you meet in life are the effect.  Charles Haanel, Master Key System, Part Three Introduction

The task at the end of Part Eight is to imagine a Battleship.  This was not difficult for me, having been in the Naval Reserve as a young adult, and actually having been on a few ships, one quite similar to the one pictured above.  But Haanel doesn’t just ask us to picture a Battleship, he asks us to imagine how it came to be.

So I thought about all the workers, the crew on the ship – the officers, the signalmen, the boatswains, the engineers, radar technicians, the cooks, the admin staff, the medical staff.  They were all trained for their jobs – trained on the ship, but trained before-hand in both their trade, and basic military training.  And before that, they went to school, maybe had other training and other jobs.  At what point did they think “I want to join the Navy?”

What happens when you take away the crew?  Well, you better put that ship into dry-dock.  A ship with no crew will just float aimlessly, perhaps causing massive damage! 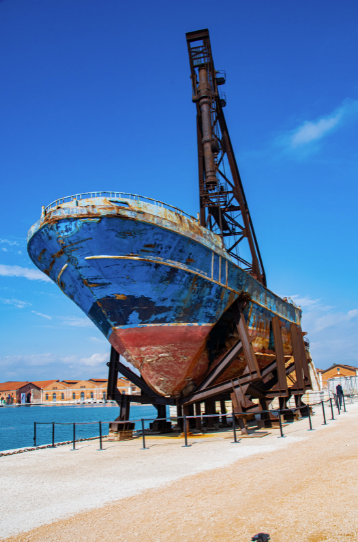 If you have listened to Earl Nightingale’s Strangest Secret, you might remember a story about ships:

Think of a ship with the complete voyage mapped out and planned. The captain and crew know exactly where the ship is going and how long it will take — it has a definite goal. And 9,999 times out of 10,000, it will get there.  Now let’s take another ship — just like the first — only let’s not put a crew on it, or a captain at the helm. Let’s give it no aiming point, no goal, and no destination. We just start the engines and let it go. I think you’ll agree that if it gets out of the harbor at all, it will either sink or wind up on some deserted beach — a derelict. It can’t go anyplace because it has no destination and no guidance.  Earl Nightingale, The Strangest Secret

I could say a lot about that quote, but I think I will stick to the topic at hand for now.

Let’s look more closely at the ship.  Of course it is not just a ship, but a collection of many different parts or systems.  There is a communication system, the engine and all of it’s components, the radar and navigation systems, and so on.  Plus many systems just to serve the crew, like food and medical.  You could take each of those components and follow it back to it’s origin – taking into account how it was built, what resources were required, who designed it.  And of course, the actual ship was designed and built before all those components were installed.  You could follow back to how the resources were mined or manufactured, and all the people that made that possible.

Oh, and there were a lot of decisions that were made as well.  About the ship – to build it, to allocate funds for the construction, how big it would be, what functions it would carry out (tug boat, aircraft carrier, or battleship?)  And all those folks who decided to be involved!  There were a LOT of decisions.  And decisions are very important, right?

And of course, there is the person who realized that a ship would float, even one that was made of heavy material.  I am not sure when that was, but people have been putting boats in water since about 4000 BC!

What is the benefit of doing this “Battleshipping?”

You will find exercises of this kind invaluable.  When the thought has been trained to look below the surface everything takes on a different appearance, the insignificant becomes significant, the uninteresting becomes interesting; the things which we supposed to be of no importance are seen to be the only really vital things in existence.  Charles Haanel, Master Key System, Part 8 Line 33

I quite enjoyed this exercise, I hope you have as well.  And, if I have time during my “sit” – after I have gone all the way back in time – I go forward and imagine everything coming together like a time-lapse film.  And I wonder where that ship will go:)